This isn’t indecision necessarily but the opposite namely a wrong decision.

Anthotypes are prone to this error in the decision process. I usually stop them too soon, take the whole thing apart, look at the underlying exposure and put everything back together and continue the exposure.

Here is the pokeberry anthotype of Clem Wolfham #2. It’s pretty dark but this time I think I’ll err on the side of print density. There are subtle details that are difficult to make out in the documentation but I think it will buy this print a few more years of life as it goes from storage to exhibition and back to storage.

Another day and another anthotype. Over the last couple of weeks, I been squeezing in a little bit of time to coat a sheet of paper with brown liquid made from boiling the skins of yellow onions.

The paper has about eleven coats of onion skin broth. The pajama is in-labeled meaning their is no name from a previous owner. It has been cut along the seems to leave only the button front and collar. The paper is Fabriano Artistico Extra White Hot Press. 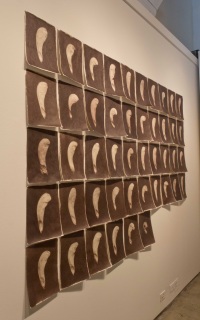 Forty-six is making its way across the continental divide to be part of Icebreaker 4, an all media, un-themed juried show at Denver’s IceCube gallery. The gallery is located at 3320 Walnut Street in Denver, Colorado. The show was juried by Nora Burnett Abrams, the Associate Curator at the Museum of Contemporary Art Denver. An opening reception is scheduled for March 8th, 5-9pm and a Juror’s Conversation event is planned for March 14, 3:30pm.

The exhibition will be on view from March 7th through March 30th.

While taking a look at the anthotype on its second to last day of exposure, I noticed the interaction of the pajama pattern, plexi, clear tarp and the snow / ice coating.

I want to make up a word to describe it: drawerly.

Once upon a time I frequently posted to this blog. It was an outlet for writing about difficulties and successes in the studio. I used it for exhibition news and for progress updates on the slow goings on of the anthotypes.

It’s been a long time since I posted to this site. I have been working on several projects, sending out teaching packets hoping for a sign of interest from academia, applying for a residency (long term project coming due very soon), and of course teaching. I would like to write more about teaching but there are fundamental issues I need to wrestle with including professionalism and articulating those things that make me want to teach. Everyone knows its hard and time consuming but rewarding in unlikely ways.

I’ll slowly work a discourse on my teaching in future posts. For now I need to get the blog ball rolling. Why not start with a cyanotype.

In the in vivo exhibition, I showed four of the fungi. There were others that I was working on but for many reasons, mostly placement or shape, I elected to work with the four that I did. There was one that almost made the cut. It was an early one but it was a horizontal and it would stick out in a grid of four. The prints I did make of it happened to be made on a paper that wasn’t working well or perhaps I was getting lazy with exposure ( I seldom use step wedges although I should). Regardless, they lacked clean  highlights and seemed much flatter than the other four.

There was a little window of impracticality last Saturday. It was the last day to drop off work for the annual Dayton Visual Arts Center auction. I had an OK print of the cyanotype that didn’t make the cut but the only frame I had that could accomodate it would be a natural wood finish. OK with a blue print but I am committed to showing the cyanotype floated in white finished wood frames. I had two downstairs I had bought off a student but they were narrower than what I typically used for the 18″ x 23″ prints I had been making.

So I reprinted it Saturday morning. It was sunny. It was due by 5 pm. It was not a wise decision.

There is a stack of paper I have been sitting on, waiting to try it out with cyanotype and vandyke brown. It was on sale. It was pH neutral. It was crying out for a test run.

I tore it down to 16″ x 23″, made a good print on the first try. A terrible print on the second. A really, really good print on the third try once it dried down.  I managed to get it framed, wired and down to DVAC before they closed at 5. Somehow I even squeezed in a short artwork documentation session so I could have an image of it.

But being rushed, I made one mistake amongst lots of little ones which I had no time to undo. I wired the frame upside down. I think I can live with it this way.