Before too much time passes, I am compelled to write about a quick half day trip to Serpent Mound near Peebles, Ohio. This is an indigenous peoples site used for not only burying the dead but also perhaps for marking key recurring astronomical events such as the shortest day of the year and the summer solstice. Current theories and testing of the site suggests that the first use of the site occurred around 321 BCE. Read more about the current status of Serpent Mound here at Indian Country Today.

Bridgette and I went to visit a friend of hers, Martine Myrup, from her time at the Glasgow School of Art almost 16 years ago. On August 4th we met in Cincinnati mid-day and drove to Peebles. Here are some of the images from that day all shot with my Windsor, a Diana clone, camera. 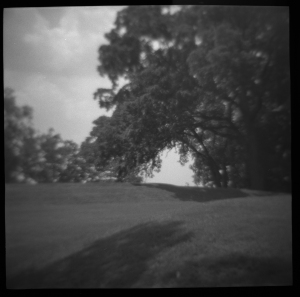 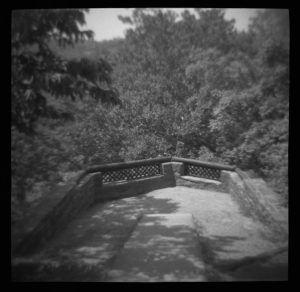 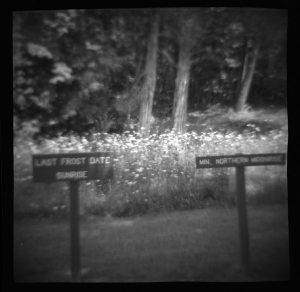 During the late spring and most of this summer, grinding up pigments, collecting flowers, coating paper and arranging clothing into the exposure set- ups have taken up a lot of my studio time. In other words, I’ve been making only anthotypes. Perhaps “only” is the wrong word. Three weeks ago I broke out the view camera to photograph support stockings laid out on the grass.

I am working with anti-embolism stockings as a way of looking back to my father who wore them late in his life. I would find them in the laundry area or see him wearing them with his summer pajamas as he watched the “Tonight Show” in the 1980’s and 1990’s.

Although he didn’t wear white thigh highs, I wore these for about three hours. I am now at the age that my father was when I noticed him wearing support socks and my primary care physician is encouraging me to adopt them for daily use.

So in late July I tried the three hour experiment in the morning and then set up the camera in the backyard around 3 pm. Accompanied by a squadron of mosquitos I made four exposures, which I finally began printing this week.

It is only the second time this year I have used the 8×10 camera and it was a struggle especially with the elastic of the dark cloth around the film back area. Forgetting the numerous mosquito bites, I feel like I am ready to get back to more camera work.

In March and April of this year I met with Tanya Maus to be interviewed for a project she was doing for a six-month radio production training program at 91.3 WYSO in Yellow Springs (in Ohio). The goal of the interview was to give her a chance to edit many minutes of audio into a smaller four to six minute story that would eventually be broadcast on WYSO.

We met twice and I talked at length about the anthotype work as well as the continuing vandyke brown projects. I haven’t heard it yet but those of you who know me well, know that I hate my “Telephone Voice”.

It is scheduled to air this Wednesday, August 20th at 6:30 am and 8:30 am E.S.T. during the station’s Morning Edition.  For those of you living outside the Miami Valley area who wish to hear it, WYSO will have a live stream via iTunes. Please go to https://itunes.apple.com/us/station/idra.873003657 to listen to WYSO live on iTunes radio.