This morning, around all of the hubbub of the week, I received an email regarding an art and design blog that was featuring my work with anthotypes.

Nice surprise from Italy. Thank you LanciaTrendVisions! Lancia Trend Visions is an online magazine acting as a talent scout for emerging artists, designers, architects, and other creative types.

The blog can be accessed at LanciaTrendVisions.com.

The last twelve calendar months have been rewarding as far as making work but difficult in regards to finding an audience for it. The somnambulist project has engaged me like no other photographic project but it has many features to it that really have kept it from gaining traction.

Scale, permanence, and similarity to to work done by Adam Fuss and Karen Savage have led to some push back. I go blindly into my photographic projects. They do marry technique and concept although I will be the first to admit that I get lost in materials and processes.

Although I have been feeling this, there has been a spot of good news this week. The New Orleans Photography Alliance has announced the finalists for the 2014 Clarence John Laughlin Award. I am one of the thirteen photographers selected. Also included in this group are Keliy Anderson-Staley, Anne Berry,  Susan Burnstine,  Benjamin Dimmitt,  William Guion,  Leslie Hall Brown,  Jaime Johnson, Meghann Riepenhoff,  Euphus Ruth, J Michael Skaggs, Cheryle St. Onge, and S. Gayle Stevens.

During the late spring and most of this summer, grinding up pigments, collecting flowers, coating paper and arranging clothing into the exposure set- ups have taken up a lot of my studio time. In other words, I’ve been making only anthotypes. Perhaps “only” is the wrong word. Three weeks ago I broke out the view camera to photograph support stockings laid out on the grass.

I am working with anti-embolism stockings as a way of looking back to my father who wore them late in his life. I would find them in the laundry area or see him wearing them with his summer pajamas as he watched the “Tonight Show” in the 1980’s and 1990’s.

Although he didn’t wear white thigh highs, I wore these for about three hours. I am now at the age that my father was when I noticed him wearing support socks and my primary care physician is encouraging me to adopt them for daily use.

So in late July I tried the three hour experiment in the morning and then set up the camera in the backyard around 3 pm. Accompanied by a squadron of mosquitos I made four exposures, which I finally began printing this week.

It is only the second time this year I have used the 8×10 camera and it was a struggle especially with the elastic of the dark cloth around the film back area. Forgetting the numerous mosquito bites, I feel like I am ready to get back to more camera work.

In March and April of this year I met with Tanya Maus to be interviewed for a project she was doing for a six-month radio production training program at 91.3 WYSO in Yellow Springs (in Ohio). The goal of the interview was to give her a chance to edit many minutes of audio into a smaller four to six minute story that would eventually be broadcast on WYSO.

We met twice and I talked at length about the anthotype work as well as the continuing vandyke brown projects. I haven’t heard it yet but those of you who know me well, know that I hate my “Telephone Voice”.

It is scheduled to air this Wednesday, August 20th at 6:30 am and 8:30 am E.S.T. during the station’s Morning Edition.  For those of you living outside the Miami Valley area who wish to hear it, WYSO will have a live stream via iTunes. Please go to https://itunes.apple.com/us/station/idra.873003657 to listen to WYSO live on iTunes radio.

It is difficult to know where to start, when I haven’t blogged about my making work in three months.

I am currently using red tulip petals collected during early May. Truly gleaned because allof the petals were on the ground. The ones that were too damp, we’re cleaned in water and ground up in a mortar and pestle. That first red tulip anthotype of the year was one of two images I’ve made involving two bed jackets. The exposure was stopped late last month and is a bit more narrative than the first double bad jacket image (made from yellow onion skin).

Below are both of the images. Top: yellow onionskin “Two Bed Jackets”. Bottom image: “Puppet Show” in acidified red tulip.

Both Bridgette Bogle and I have work in this show. Her collection of paintings, “Twelve Little Mistakes”, won a second place juror’s (Melissa Vogely-Woods) award. Even with the strong showing of painting, three of the anthotypes were juried into the exhibition. One of them or maybe the three together garnered a “Bad Girls for Good Art” award.

The exhibition runs  from October 21–December 6. The Fort Hayes Shot Tower Gallery’s schedule: 8 am – 4 pm Monday through Friday with the exception of Wednesday. The gallery remains open until 6 pm on Wednesday. 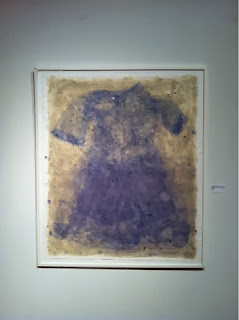 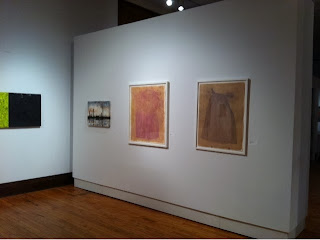 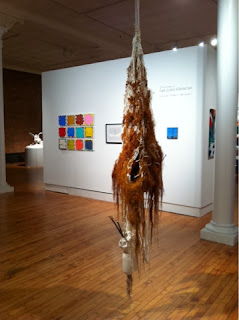 Inosculation runs which is set up as two halves of the same exhibition with staggered dates, runs October 30 – December 15 for the upper gallery half of the show. The lower gallery half runs from now until November 17th.

The  joint reception is on November 3rd from 6-8pm.

Three of the sleep wear anthotypes are will be on display in the second half of the exhibit. Since the show is pairing OSU faculty with alumni from the years around 2002  – 2006?, I am being showing along side Ardine Nelson who was my M.F.A. thesis advisor way back then.

Here’s a picture of the work at drop-off yesterday, October 23rd.

The Anthotype project is slowly progressing. The majority of the pokeberry coat has been exposed and is now in the hands of local artist and seamstress for the project, Charmaine Griffith. That’s her in the picture with David Crowell who is allowing me to expose the three last pieces on the roof of Custom Frame Services.

The blackberry / mulberry coat continues to expose in the backyard. I’ll start another coat in the gallery space of the Dayton Visual Art Centrr once the installation for “In Vivo” begins.

At the start, let just get this out of the way: I do things the hard way.

I am basically carrying a chunk of what I consider my studio. For Houston, I brought 5 large anthotypes, rolled up in a tall plastic tube as well as  two smaller ones. Next is the hard case, a too large to carry-on suitcase which has my  clothes, two larger portfolio boxes and toiletries. Addtionally I have my messenger bag with lap top, an Agfa 11×14  box with some extra prints to exchange or sell, chargers for the computer and cell phone, a hard drive, etc. etc. etc.

Here’s the narrative of my travels today: lug this stuff to the check in counter at the Columbus airport after an hour drive at four in the morning. Did I mention that my flight departs from a city different from my final return trip city of Dayton?)Retrieve the luggage after a turbulent re-route of my Houston flight (an extra two hours in the air). Forget the large tube of anthotypes while retrieving the hard suitcase from a locked cage near the baggage carrousel ( I evidently took my time going wee, eating a Tampico burrito form Papasitas). Not realizing I had forgotten my tube until I was handing my luggage to the Super Shuttle driver. Running back to locate the tube, finding it and running back to the shuttle.

Checking in at the Meeting Place office. Did I mention I liked to do things the hard way. Instead of going directly to my off-site hotel, I decided to lug all of the luggage through the Double Tree (three bags full, sir) and then track down my hotel.

Taking the train down towards Reliant Park and the Medical Center while talking to a suspiciously friendly dude who was telling me he inherited a Houston Pedicab company. He technically didn’t call it a pedicab. He described it as a three wheeled bike that has two seats in the back and was a business.

Exiting the train at the correct stop but walking the wrong direction (away from the hotel) and then back again.

I should have checked in first. BTW, I think this room is half the size of our house and it has two flat screen TV’s in it. Thank you Margie and Ray! I think I will watch cable and avoid tomorrow’s portfolio reviews. After all, it’s always humid in Houston for a gent carrying too much of his studio on foot.

Photographed and Photographing
Create a free website or blog at WordPress.com.